Use the online catalog to find books, e-books, DVDs, and CDs.

Note the subject headings in the catalog record.  For Shakespeare, unlike most authors, you can do a "Subject" search for a specific title ("Macbeth," "Shakespeare Sonnets").

Circulating books on Shakespeare are on the lower level, with call numbers between PR 2751 and PR 3099.

Editions of plays are between PR 2801 and PR 2839, alphabetically by title (from All's Well That Ends Well to A Winter's Tale).  We should have "Arden editions" of all the plays.

Though most books on Shakespeare are in the PRs, a few are in other areas, e,g. Burr's Playgoing in Shakespeare's London (PN 2596 .L6 G87 2004) in the Theatre section.  We urge you to browse the shelves, but be sure to use the online catalog, through which you can access e-books, including Richard Dutton's 4-volume A Companion to Shakespeare's Works (2003).  Volume 4. Includes an essay on the sonnets.

The most complete database for articles on Shakespeare, and literature in general, is:

This database provides citations for journal articles and book essays since about 1926. Please see the link at the bottom of this box to access it.

See the Reference guide if you want a review of database basics and Boolean operators.

The MLA database doesn't have abstracts, so you'll mainly be searching the article title and subject heading.  (If you use the Advanced Search, you can search full text--but only for articles available in full text in this database.  You'll miss book articles and citations for articles in full text in other databases, for which MLA provides a "Check LinkSource" link.)

If you want an article that isn't available in full text (or a book we don't have), please see the reference librarian (or e-mail him at arobinson@lagrange.edu) to order it on interlibrary loan, or determine if we have the journal in print.

JSTOR provides full text for many scholarly journals, from the first issue published up to about 5 years ago.  In JSTOR, you can search the full text (enclose phrases in quotation marks, as in Google:  "merchant of venice") or limit your search to a particular field ("Language & Literature").

Project Muse works like JSTOR (again, use quotation marks to search for phrases), but it covers more recent journals (the last few years up to the current issue). See below for the link to Project Muse.

This guide supplements the main English Research Guide. Please ask Arthur Robinson, our Reference Librarian, for any help you may need along the way.

You'll find reference books on Shakespeare on the main level of Lewis Library, call numbers between REF PR 2751 and REF PR 3081, including:

For overviews of Shakespeare's life and works, see British Writers (REF PR 85 .B688 vol. 1) or the Dictionary of Literary Biography available through the link below.

We have the 20-volume 1989 edition of the Oxford English Dictionary in print (REF PE 1625 .O87 1989), but you'll probably want to use the online version, which you can access through GALILEO or through the link below.

To limit your search in the online catalog to DVDs, select "DVD" in the pull-down menu for "location" 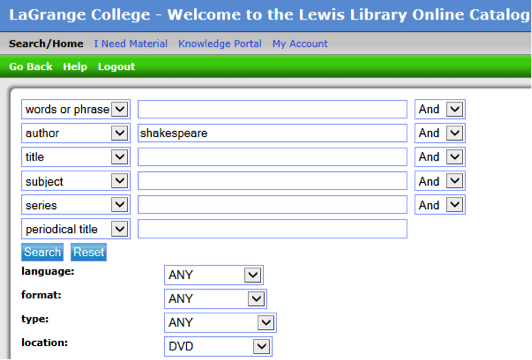 Some web sites you may want to visit: